Deep states, in their quest to exploit countries, mold public opinions and establish their influence around the world, consider wars, military campaigns, civil unrest and political interventions as useful methods. However, they believe that for these methods to be truly effective and have lasting results, they need to be coupled with the mental and psychological preparation of the relevant societies. To them, shaping and winning public opinion is essential for the achievement of imperialist goals. Social engineering efforts, which consist of extensive propaganda methods and perception operations, are considered vital to this undertaking.

Social engineering is a multi-faceted and comprehensive effort designed to influence the thoughts and behaviors of masses and to manipulate and control their emotions, desires, ambitions, reactions, and resentments.

Perception operations employed to this end serve the purpose of establishing global power and imperialist rule, of removing obstacles in their path, and of indoctrinating societies into accepting pre-determined ideas, notions, rules and principles. Showing friends as foes, or vice versa, or presenting invasion and manipulation of a country or even an attack against the country as a ‘helping hand’ are the most common examples of these efforts.

In the world of black propaganda, trickery, deceit, lies, slander and plots are all considered legitimate methods. Black propagandists twist truths, produce fake evidence and launch defamation campaigns and disinformation against alleged enemies in a bid to weaken and build public opinion against individuals, societies, administrations or countries. Spreading false news, slander and gossip are common methods they use to create an atmosphere of suspicion and mistrust. For instance, using such propaganda methods, occupational forces and imperialist powers can be presented as reliable friends, saviors and representatives of peace and democracy.

Societies brought under the influence of such perception operations, are urged to support, like, trust and join the deep powers that are behind the propaganda. At the same time, deep states seek out and enlist the help of certain individuals of obsequious, hypocritical character who have an eye for spying. Taken under the wings of deep structures, these treacherous sycophants will be promoted as reliable people and will be financially compensated, and promised security, power and prestige. In the meantime, brave, loyal and patriotic people who act against the wishes of deep states are subjected to defamation campaigns, and at times will even be depicted as rebels or enemies of democracy. This is one way these deep institutions use black propaganda methods to undermine such brave people in the eyes of the public. Furthermore, the deep states will seek to justify the persecution, unfair treatment, torture and even murder these brave people might suffer, in the hopes of deterring them from resisting imperial powers.

This is a brief outline of the social engineering policies that deep states employ in the countries they target. This method has been widely used throughout history and has even enabled some deep states to gain control over others. The British deep state, which has taken all other deep states under its control, has outdone all others in implementing their sinister stratagems.

The British deep state has been explicitly or secretly using social engineering methods since the 16th century. This allowed it to make many countries of the world its colonies and in some cases, to gain full control of countries.

From the middle of the 19th century until the early 20th century, the British deep state has focused its social engineering efforts on the Ottoman Empire. During and after WWI and WWII, its focus was once again largely on the former Ottoman territories in the Middle East, North Africa and the Islamic world in general because it believed that it would be these areas that would challenge their global interests.

In addition, there was the added benefit of controlling the world’s richest natural resources, labor force, trade routes, intersection of faiths and civilizations, holy lands and most importantly, the lands, countries and nations of the Muslims, the arch-enemy of the dajjal movement. They always knew that, left to its own devices, an Islamic Union would emerge from this region, which would mean the definitive end of the British deep state’s imperialist reign and global network of interests. For these reasons, controlling the region seems a matter of life and death for the British deep state and the dajjal movement hiding behind it.

This is the reason behind the British deep state’s fascination with the region for centuries. Directing its entire propaganda power over the region, it resumed its ‘divide and rule’ strategy for the Middle East, which had been initiated but left unfinished by the Sykes-Picot agreement. This strategy worked for countries like Iraq, Syria, Egypt and Libya and made those countries dependent on the deep state. Continuous civil unrest in these states caused their division, which was the original deep plan. In the meantime, black propaganda against countries that held the potential to lead the Islamic Union intensified. Turkey and Iran were the main targets.

The British deep state clearly declared its position as the primary supporter, backer, promoter, and defender of the terror group PKK, which is its most important weapon in its quest to divide Turkey. The media empire of the deep state, which in the past largely contributed to the dismemberment of the Ottoman Empire, played the biggest role in the fragmentation of many countries and acted as a prominent supporter of terror groups like the PKK.

The Most Important Tool of Social Engineering: Media

Many people already know that global communication technologies, particularly the media, are the most important means of social engineering operations. Media is the visual-audio transmission of information and ideas to a wide range of people through various communication tools. It includes printed media (newspapers, books, magazines, etc.), TV channels, movies, radio, Internet and social media platforms. Due to its potential to influence masses, media has been frequently used as an important tool in propaganda and perception operations. Naturally, it is one of the most effective weapons of both global imperialist powers and the world’s deep states.

Deep structures that rule over super powers of the world, like the United Kingdom, the United States, Russia and China, in their quest to manipulate both their societies and the world’s people in general, have frequently used social engineering. For instance, Hitler’s Germany greatly used it in the run up to WWII and in its aftermath. In a similar fashion, the Cold War era witnessed the widespread application of similar strategies.

The Vietnam War offers one of the most striking examples of how social engineering was used to twist the truths. By 1975, the war had ended with a devastating outcome for Vietnam. The number of deaths reached 3 million, 300,000 people were missing and 4 million were injured. The casualties were almost equal to 17% of the country’s total population. The USA, on the other hand, had a total loss of 60,000.

However, the wide-scaled vilification campaign against Vietnam by the US media not only exonerated the US even after it tore a country thousand miles away into pieces and slaughtered millions of its citizens, it also gave the necessary justification for an 18-year US embargo on Vietnam. Leslie H. Gelb, a foreign policy analyst with the New York Times even called the Vietnamese ‘outlaws’ for killing Americans.248

It must be known that the only way to combat communism is through an intellectual effort. The USA failed to see that Vietnam and the Far East in general had fallen into the clutches of communism due to faulty education, and couldn’t see that only by correct education could they be saved. Today, the USA and the rest of the world continue to maintain this faulty approach towards communism and other harmful ideologies. Violence is still considered as the only response to harmful ideologies, which causes even more violence and troubles. Needless to say, this is exactly what the British deep state wants. As explained earlier, the intention of the British deep state is to create unrest and turmoil around the world, create crises -sometimes even supporting terror groups to this end- to divide the world and easily establish its hegemony.

The wide-scaled loss of Muslim lives during the invasion of Afghanistan and Iraq after 9/11 by the Bush administration was misrepresented to the world public with the help of the media’s social engineering efforts. The so-called ‘war on terror’ caused the martyrdom of millions of innocent Muslim civilians while it was portrayed as an American effort to bring human rights, freedom and democracy to those countries. The media was the main player in this perception operation. The real plan had been to divide Iraq all along and to enable the British deep state hegemony over the region. However, the myth of ‘bringing democracy to Iraq’ deeply affected the world public opinion and as a result, many found the attacks acceptable.

The Chilcot Report of July 2016, published by the ‘Iraq Inquiry’, which was organized to investigate the role of the UK in this war, can be considered a report of confessions. Tony Blair, the then Prime Minister of the UK, admitted that the intelligence regarding the so-called presence of weapons of mass destruction in Iraq -the alleged reason for invasion- had been faulty, but the invasion took place nevertheless. He also said that after the intervention, the situation became more hostile, bloody and prolonged than imagined. This confession after so many years and after so many lost lives is no doubt significant. We will understand in the coming days if these words reflect true remorse, or if they are just a move in another British deep state game. 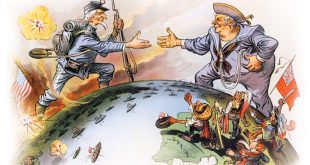 The Rise of the British Deep Mafia Structuring